REBORN AS A PHOENIX. Technology and culture: VDA Group supports the Teatro La Fenice in Venice during 2021 – 2023 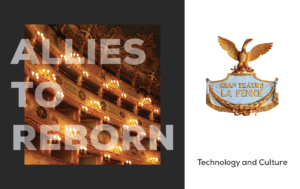 VDA Group announces its support of one of the most prestigious theatres in the world, the Teatro La Fenice in Venice. A three-year Technology-Culture alliance to support a sector hard hit by the pandemic, is now more than ever a symbol of rebirth.

2021 starts with an important initiative for the VDA Group that operates within the technology industry, focusing on guest room management systems for the hospitality sector, with sponsorship of the Teatro La Fenice in Venice for the coming three years. It is an important occasion for VDA, the international group, that for 40 years has become a worldwide ambassador of this brand made in Italy. The strategic alliance between Technology and Culture has the main goal to support those hard hit from the pandemic.

“Being a partner of the Teatro La Fenice is a great pleasure for us, because first of all it allows us to combine our brand with a theatre of international fame, that has hosted world opera premieres such as those by Rossini, Bellini, Donizetti, and Verdi“, says Piercarlo Gramaglia CEO from the VDA GROUP. “Like in culture, also technology, the basis of our core business, offers an experience that actively involves the observer, which in our case are the guests within the various accommodation facilities. We are convinced that artistic heritage is one of the major strategic assets of the world, and although it will not be easy, a restart to take us out of this situation can only commence from here“.

The idea to support the Teatro La Fenice is made even stronger by the symbolic meaning of this theatre. Phoenix Arab (La Fenice) is a mythological bird that was reborn from its ashes after its death, and for this reason, it symbolizes the power of resilience. Considering the severe blow suffered by the effects of the pandemic both for Culture and for the tourism sector in which VDA operates, the main players of these industries need to be united together to face this complex situation.  And it is precisely this awareness that lead VDA to select Teatro La Fenice, an iconic place and an emblem of Rebirth and Resilience.

“It is with great pleasure that La Fenice is to be able to welcome into the ranks of its supporting members such a young and dynamic company as the VDA Group” said Fortunato Ortombina, Superintendent and Artistic Director of the Fondazione Teatro La Fenice in Venice.

There are many elements of closeness between our two realities, even though we move in different arenas, namely the VDA Group in the hospitality field, and La Fenice in the Music arena. We are both international reference points in our respective sectors, and we have the honour, and the burden, of being considered as ambassadors of Italian excellence all over the world. As such, culture and technology can really help countries to restart, and at such a difficult time in our history, being able to count on the support of a partner like VDA Group gives us great strength. It means that we will not be alone in the path of the ‘rebirth’ of our iconic Phoenix”.